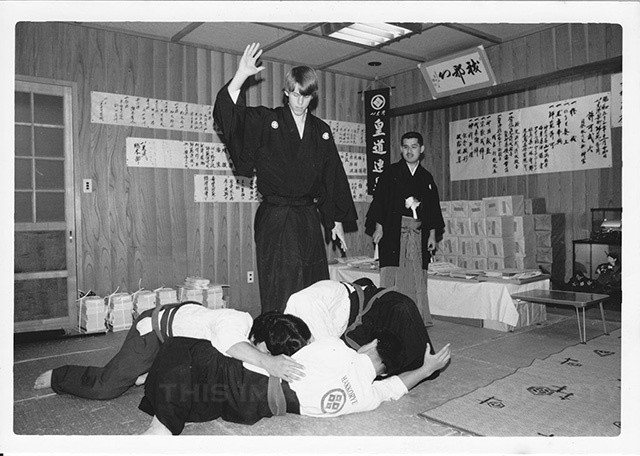 1971 Served as an assistant instructor at the Georgia Aiki Kai (Atlanta, Georgia) and assisted Shihan Yamada Yoshimitsu and Sandan Rodney Grantham as they introduced Hombu Aikido in Florida

1977 Awarded Sandan in Hakkoryu under Kaiden Shihan James A. Benko, known as the father of Hakkoryu in the United States

1978 Awarded Yondan in Hakkoryu under Kaiden Shihan James A. Benko

1978 Given a seat on the Council of Shingi-in (life long judges), a position he held until his passing

1986 Received a “Certificate of Appreciation” from Nidai Soke.

1992 Accompanied his two students, Ralph Verde and Steve Glaser to the Hakkoryu So Hombu Dojo in Omiya, Japan for Menkyo Shihan training.

1996 Accompanied his student Gordon Kiyokawa to the Hakkoryu So Hombu Dojo in Omiya, Japan for Menkyo Shihan training.

1996 Received a “Certificate of Appreciation” (and a very nice sword set which was a part of the Hombu Shinden) from Nidai Soke for all of his work for the betterment of Hakkoryu.

2004 Received a “Certificate of Appreciation” from Nidai Soke.

Much of Brian’s later work involved licensing and copyright work and trademarking the Hakkoryu name to protect it outside of Japan.